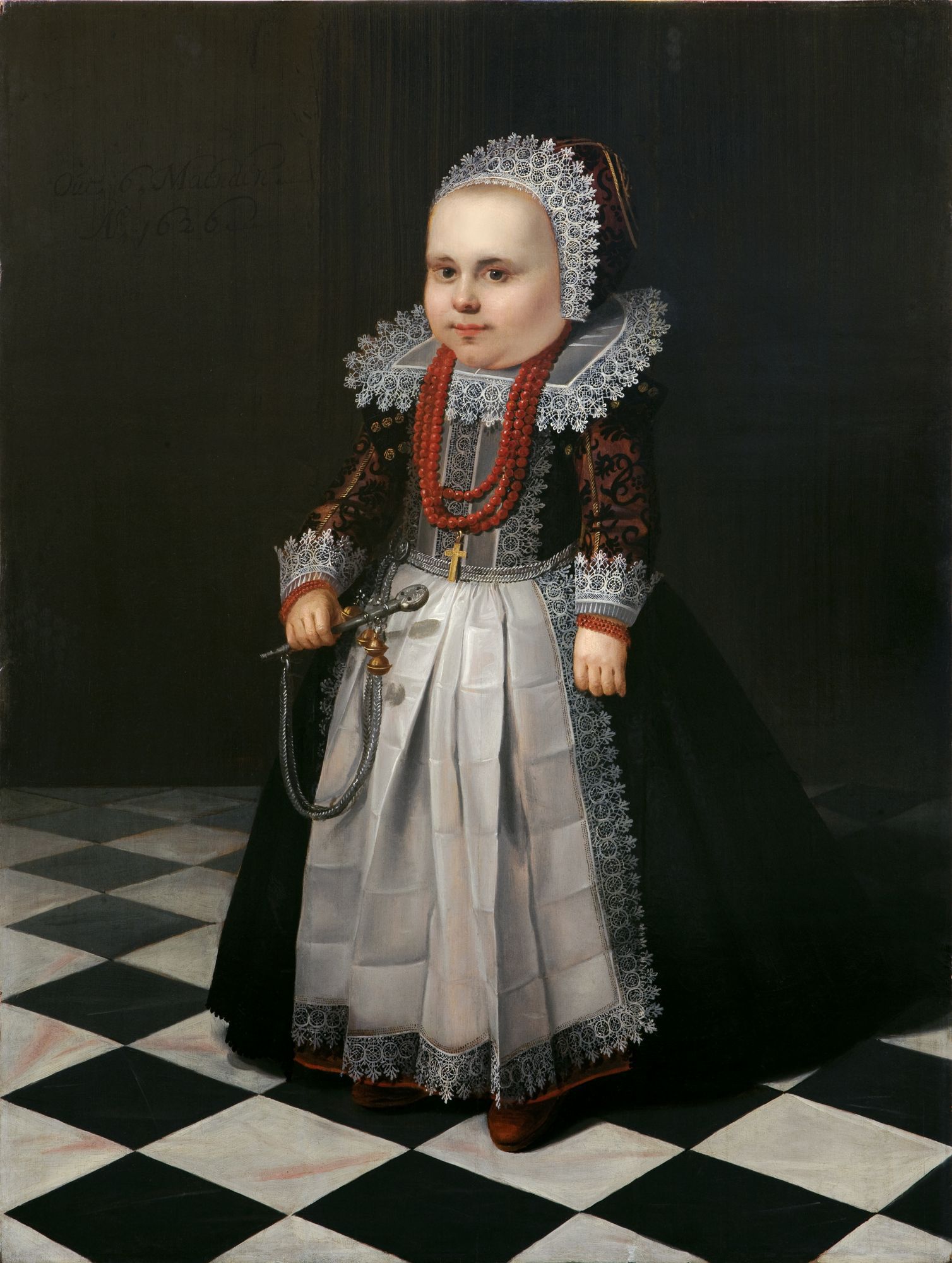 The realism of seventeenth-century Dutch painting is often commented on; this painting, however, is proof (if proof were needed) that this realism is only relative and is sometimes subject to distortion. According to the inscription on the left of the panel, this child was six months old when the portrait was painted. It would have been impossible at that age for him or her to stand upright. The face has evidently been integrated into a pre-existing composition of the type often found in representations of children from wealthy families in the first half of the seventeenth century, as can be seen in the work of Wijbrand de Geest I (1592-1661/1665) or Jan Claesz. (1565/1575- 1618/1619) and their followers. As in the portrait of little Grietge (cat. 2), the baby is presented in a somewhat hieratic pose, standing on a black and white floor (not tiles this time but costly marble) and in front of a plain dark background. The costume, however, is richer: there is abundant fine lace around the batiste collar and the apron with its well-pressed pleats, and the clothes are decorated with rosettes and threads of gold on the sleeves and bonnet. This style of clothing, which may seem very feminine to modern eyes, was worn indifferently by boys and girls and gives no clue to the gender of the young child.1

Like Grietge, the child is wearing the red coral necklace that was often placed round the neck of young children because of its curative and soothing properties.2 In families, the necklace was worn by the youngest of the brood.3 This baby also sports three rows of coral beads around each wrist; this is the way bracelets were worn in the seventeenth century, in pairs, as can also be seen in Golden Age portraits of women. Unlike Grietge’s necklace from which hangs a silver rattle, this young model has a gold crucifix as a pendant. The family therefore belonged to the Roman Catholic faith,4 a minority religion in the Republic of the Netherlands – which was mainly Calvinist – officially banned from public places of worship but widely tolerated. The silver rattle with four gold bells held by the child is particularly precious.

Generally attached to children’s belts, these goldsmiths’s wares were not only toys but also – and particularly in portraits – indicators of social status. They were often given as gifts to the family on the occasion of baptism. The child could rattle the toy and make the bells ring as entertainment, and also blow into the whistle which formed the body of the rattle.5

Unlike the Portrait of Grietge Maertensdochter, there is no detail in this painting by which we could identify the region of the Northern Netherlands where the maker of this painting worked.

1See for example the portrait of a boy, dated 1627, wearing similar clothing to that in our painting: https://rkd.nl/explore/images/132539; see also Saskia Kuus, ‘Kinderkleding in de zestiende en zeventiende eeuw’, in Kinderen op hun mooist. Het kinderportret in de Nederlanden 1500-1700, exh. cat., Haarlem, Frans Hals Museum, Antwerp, Royal Museum of Fine Arts, 2000, pp. 73-84, pp. 79-81, where it is made clear that no jewel or element of clothing was worn exclusively by either sex when children were very young.

3In the Portrait of the Van Campen Family by Frans Hals, the family coral necklace is represented twice: once round the neck of the son in the centre of the portion of the painting which is now in Brussels, and also worn by the little girl added at a later date (in the portion of the painting now in Toledo, Ohio). See Frans Hals Portraits. A Family Reunion, exh. cat., Toledo (Ohio), The Toledo Museum of Art, Brussels, Royal Museum of Fine Arts of Belgium, Paris, Fondation Custodia, 2018-2019, p. 36.