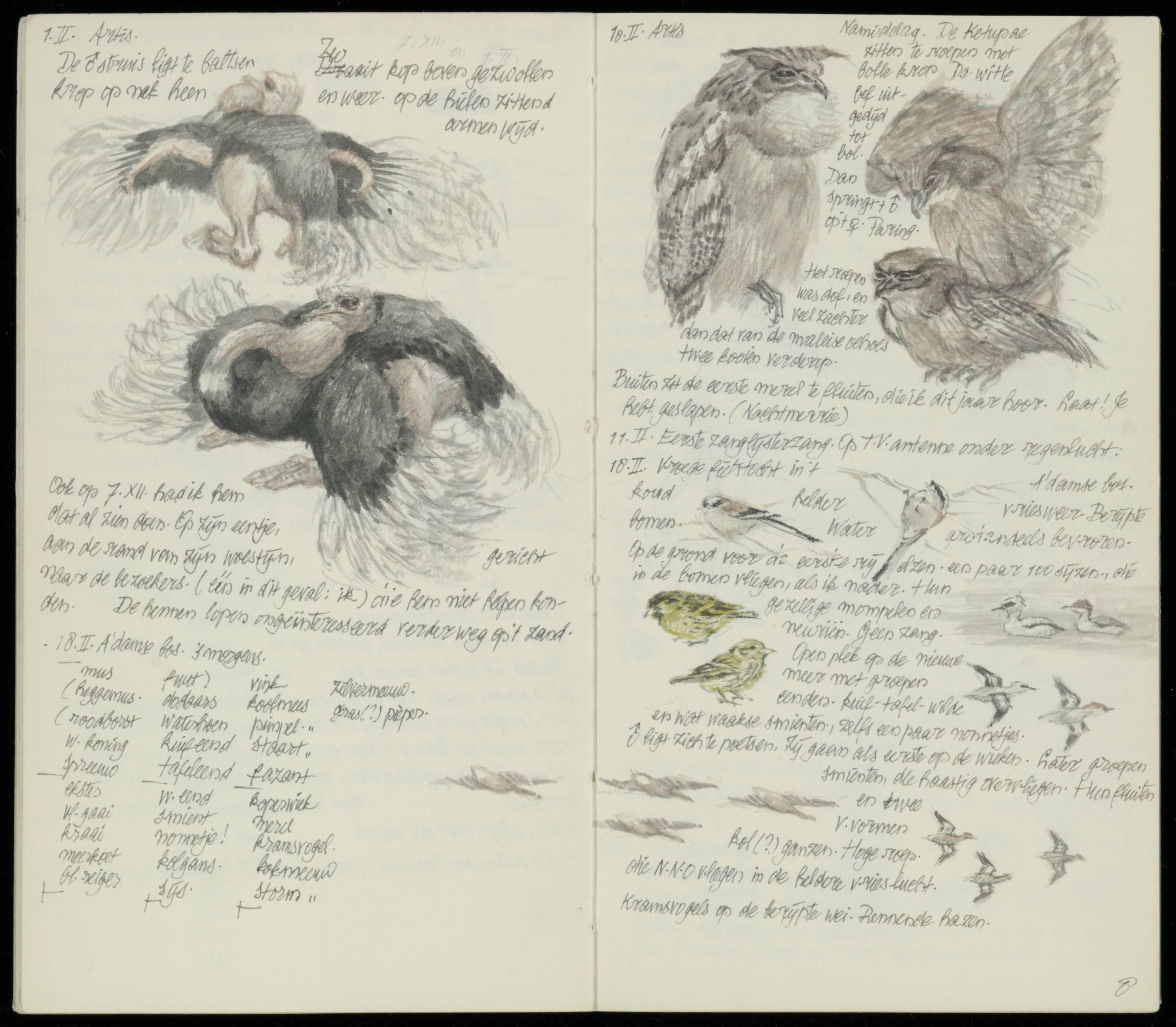 In 2013, a little over two years after the artist’s death, the Fondation Custodia and the Museum Het Rembrandthuis in Amsterdam staged the exhibition Peter Vos. Metamorfosen (“Peter Vos. Metamorphoses”), complete with a lengthy catalogue.1 Peter Vos’s fascination with transformations involving birds dovetailed with his love of birds and knowledge of ornithology. But above all he was a draughtsman of what the catalogue called “much that moves with wings”.2

And that is easy to feel in these two books of drawings that were recently acquired by the Fondation Custodia. The first is a bird diary (see cat. no. 78), as birdwatchers call it, a record of the birds spotted at a particular location and time. And for that purpose Peter Vos developed a system of drawing that distinguished between a bird that he had seen and one that he had only heard – and he also noted down “first seen, then heard” and “first heard, then seen”. He regularly went on birding excursions, for instance to the Camargue, Israel, the Dutch island of Terschelling and Spain.3 The locations in this particular diary were close to home: the Amsterdam Woods, Varik on the River Waal, the Zuidpier in Amsterdam, and also Artis Zoo. In between the notes written in a clearly legible hand and lists of bird species are drawings capturing the flight of a flock of birds and of bird behaviour seen from close at hand. He sometimes witnesses tragedies through his binoculars, like the time on 5 May 1984 when he sees a jay that has killed a young sparrow in the garden pecking bits of meat from its breast and laying “a long piece of intestine on the branch beside it”, while the mother sparrow nearby ‘alarms’ the neighbourhood. The event is recorded in a drawing. On 27 March of the same year he wrote: “At last hear a goldcrest singing again. Satisfaction of seekers, and find your suspicion confirmed”. He observes eagle owls in Artis Zoo on the afternoon of 10 February 1984: “The Ketupae sit calling with bulging crop. The white breast expanded to a sphere. Then cock leaps onto hen. Mating. The calling was dull, and much softer than that of the Malaysian oehoes two cages away.”

Peter Vos liked drawing on the broken white paper that was (and is) used for the publications of De Arbeiderspers, particularly for its Privé-domein series of diaries and correspondence. His friend Theo Sontrop (1931-2017) supplied him with dummies, some of them with a printed quire. The selection from Gustave Flaubert’s correspondence that was published under the title Haat is een deugd (“Hatred is a Virtue”) served for an undisputed landmark in Peter Vos’s drawn oeuvre: 333 vogels (“333 birds”) (see cat. no. 79). The drawings are dated 1980 and 1981, and the title page bears the date 1982, when the drawings had been completed. There are no corrections in this book, and it is also impossible to shift pages around in a stitched book. The result is absolutely breathtaking, and the book of drawings fits squarely within the tradition of the very best examples of the genre. The drawings are humourous, and original in their composition. The choice of the bird species is personal. It is a mixture of native birds and zoo-dwellers. The ability of the drawings to characterise the birds in a pure form compels admiration. It is also clear that all those years of keeping bird diaries and observing birds and their behaviour has led to something of a different order. The birds are not identified on the pages themselves, but there are plate numbers between the drawn pages that do give their Latin names, and the drawings are dated in spidery handwriting.

The technical control is particularly apparent in birds with deep black plumage, but in fact one always has to look at the illustration as a whole, which is why the Fondation Custodia is thinking of publishing a facsimile. Up until now a few scattered pages have been reproduced – in Ed Leeflang’s volume of poetry titled Begroeyt met pluimen of 1991, and in the catalogue of the major exhibition of 1995 in Breda, Peter Vos: tekenaar (“Peter Vos: draughtsman”).4 Ed Leeflang’s poetry shows that he was also able to look at birds and capture in words what Peter Vos caught in a drawing. Vos never shows a bird’s surroundings. The birds are on an otherwise bare sheet of paper that looks a little like snow.

His pond is close by. Hungersends him across the street, into otherwhite reed-land. He was concealed.He has submitted to the dayof tomorrow, not knowingwhat lies on the other side.5 GL

2For the part that birds played in Peter Vos’s imagination as a writer of illustrated letters see Jan Piet Filedt Kok and Eddy de Jongh, with the assistance of Saïda Vos, Peter Vos. Getekende brieven, Amsterdam 2017.

6“Prologue. This (fifth) bird diary begun after a long break. Sombre times, when I rarely went out of doors, and briefly with no interest, or with difficulty, in the order that had given me so much pleasure and enthusiasm for all those years. “A Study in Grey” repeated.” The final remark is a reference to the publication Peter Vos. Studie in grijs, which is subtitled ‘balans van drie jaar vogeltekenen’ (Balance of three years drawing birds), Amsterdam 1980.