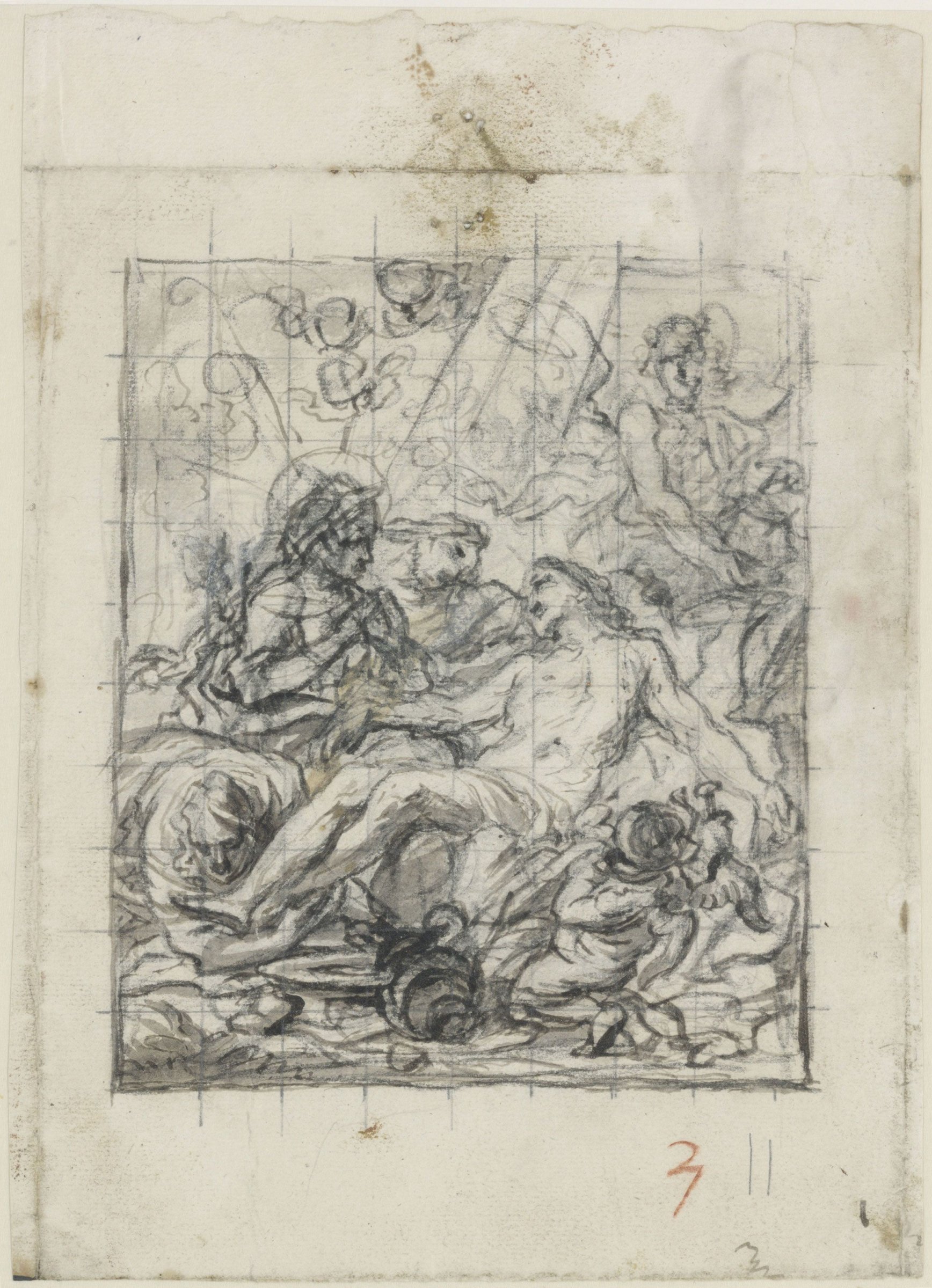 Cornelis Schut’s drawn oeuvre was more than doubled a few years ago with the appearance on the art market of more than 130 previously unknown drawings.1 The bulk of the group, which was evidently part of Schut’s workshop stock that had remained together for more than 300 years, was auctioned in Paris in 2010. The Fondation Custodia succeeded in buying 23 of the sheets, among them this Lamentation from a group of five small studies for the same subject. They are preliminary studies for a painting that is part of the memorial for the Antwerp merchant Adriaen van Ginderdeuren (d. 1647), which is still in its original position against a pillar in the city’s Church of St James.2 A document of June 1648 shows that his family commissioned the painting from Schut not long after his death in April the previous year. That makes the small group of drawings some of the few sheets by the artist that can be given a more precise date.3

One of Schut’s idiosyncrasies was a search for alternative options for a subject by means of multiple sketches executed in different techniques and in varying degrees of finish. On more than one occasion he numbered these different versions.4 Unlike his great contemporaries Peter Paul Rubens (1577-1640) and Anthony van Dyck (1599-1641) he usually started by drawing a frame for the composition. Two of the five sketches got no further than a casual sketch, a third was reworked all over with the pen, and the remaining two were worked up further with the pen and brush. He must have been satisfied with this one, for he squared it with a grid for transfer. Indeed, the positioning of the figures in the painting is almost exactly the same as in the drawing. The only major modification was made to the Virgin’s head, which had already been been corrected in the drawing with vigorous strokes of the pen but in the end was given an upward gaze and turned towards the viewer, an intervention that heightened the drama of the scene more than a little.

In the document of 1648 a witness who had been present when the contract was drawn up with Schut declared on behalf of a relative of Van Ginderdeuren that the painter had promised that he would replace the painting with another if it was not found satisfactory. However, it is not known whether further steps were taken, and whether the work now in the church is a replacement for a rejected version. Nor are there drawings that could be associated with an alternative treatment of the subject, unless they should be sought among the other sheets in the group of five.

Schut, who is first recorded in his native city in 1631 after a period of some ten years spent in Italy, was one of the most sought-after Antwerp masters for ecclesiastical commissions, certainly after the deaths of Rubens and Van Dyck in 1640 and 1641.5 In 1647, for instance, he executed the huge ceiling painting for the crossing tower of Antwerp cathedral.6 However, there are remarkably few drawings of his that can be related to these often monumental works. Together with the four studies for the Descent from the Cross with St Francis in the Grand Curtius in Liège, which probably dates from 1645 or the following years,7 this small group of five for the Lamentation is therefore a welcome reference point for our knowledge of Schut’s drawing style in the last years of his life. HB

Inscribed, lower right, probably by the artist, in pen and brown ink: “1”; more to the left, probably in a seventeenth-century hand, in red chalk: “3”

4In our series, one finds the numbers 1, 3, 4 and 6; the numbers 2 and 5 are absent and the number 1 has been attributed two times. Accordingly, one cannot exclude that the series in its actual form is incomplete.