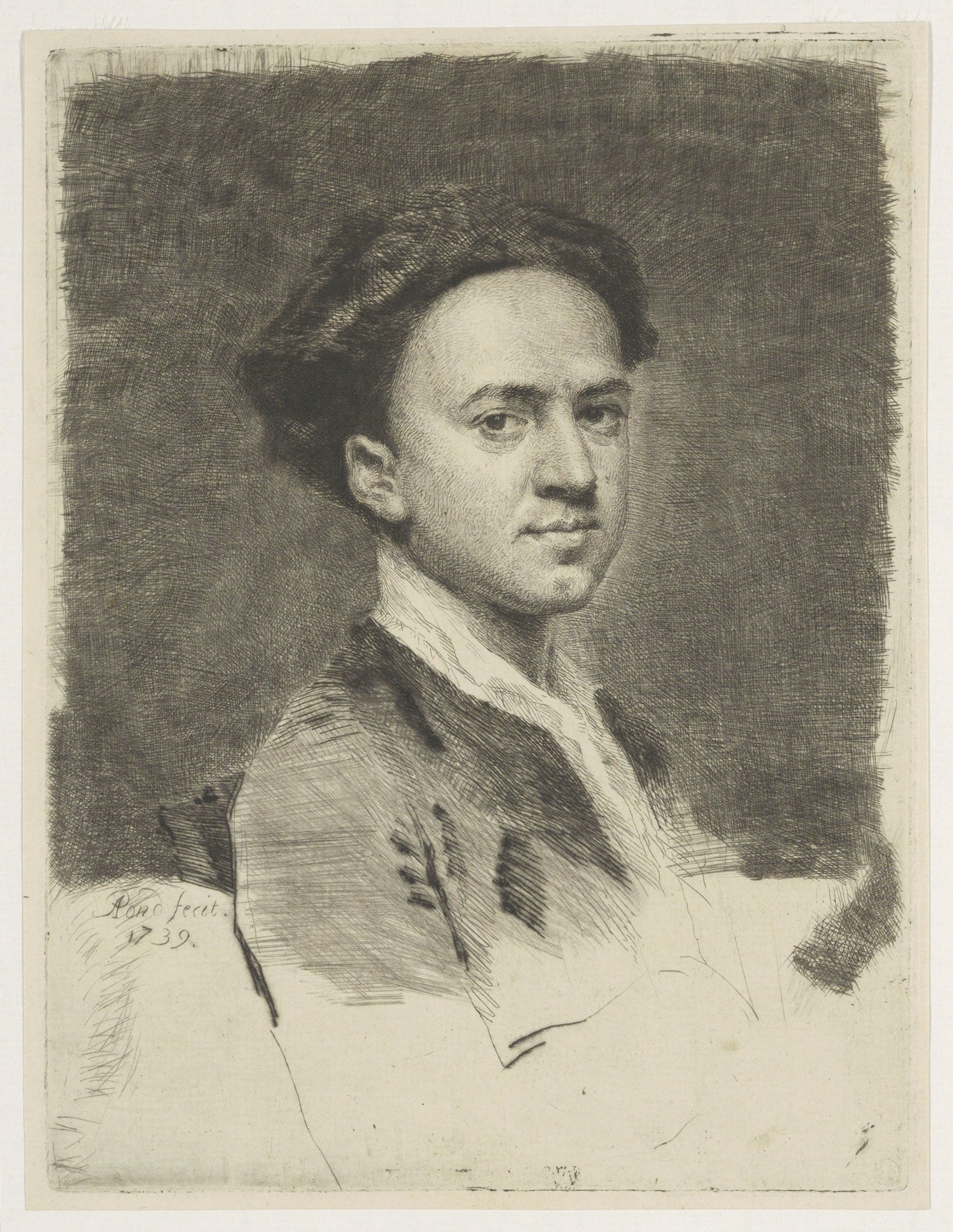 This captivating self-portrait is a delight. The sitter looks out at us with a gently quizzical gaze. Although unfinished, the print is already signed and dated. Arthur Pond, the maker, counted on finding spectators who would appreciate a proof impression of this kind, for he printed it in a small series, each time with subtle additions and modifications. He is calmly informal: his hair is shaved high off his forehead so that a wig can be placed on his own full, back-combed head of hair, but the wig is conspicuous by its absence. And his attire of a jacket and open-necked shirt was also not designed to show himself off at his most elegant. Pond assumed that the viewer or potential purchaser would have a certain visual literacy. The print was made in England in the drypoint technique, which was far from current there at the time. It was borrowed from Rembrandt’s etchings, as are the sketchiness and the sitter’s pose, not in order to play copycat to the great Dutch master but in emphatic reference to him. Pond must have assumed that his contemporaries would recognise and appreciate those allusions.1

Pond’s biography presents us with a very versatile man.2 He trained as a portrait painter, possibly with John Vanderbank (1694-1739). After travelling to Italy he gradually evolved into an enterprising print publisher and collector. He moved in the circles around Jonathan Richardson, and won the trust of many English collectors, for whom he also restored paintings.3 He and Charles Knapton made prints with the aim of reproducing drawing techniques, which he published as Prints in Imitation of Drawings, for which collectors could take out a subscription.4 Pond must have had a remarkable feeling for style, which he nourished with his large collection of drawings and prints. He was in direct contact with Jacob Houbraken (1698-1780), the son of the painter and artists’ biographer Arnold, from whom he must have acquired prints by Rembrandt that came from the auction of Willem Six (1662-1733), the heir of Jan Six, with whom Rembrandt had been in close touch. Pierre-Jean Mariette (1694-1774) said of Pond, whom he got to know in Paris after the Englishman’s return from Italy and with whom he corresponded for years, that he did not rate him that highly as a portrait painter, but that “he was interested above all in engravings made by the painters themselves, and few people have collected as many as he has. His oeuvre of Rembrandt is the most perfect and largest”.5 The Self-Portrait of 1739 shows how familiar he was with Rembrandt’s etchings, and his toying with the drypoint effect demonstrates that he had seen excellent impressions with his own eyes, for it is in only the very finest prints that one discovers Rembrandt’s mastery of the technique. Many of his etched self-portraits are against a white background, with the exception of Self-Portrait Etching at a Window of 1648, in which there is a fully hatched wall similar to Pond’s and an intensive use of drypoint.6

The minor differences in Pond’s many states were evidently designed to appeal to collectors who admired such variety, as was the case with Rembrandt. Nicolas Stogdon is working on an article with a revised description of the states of Pond’s Self-Portrait, and was kind enough to share his discoveries with us. In his view the newly acquired print is a unique impression of the hitherto undescribed fourth state out of a total of nine. It was only late in the sequence that the empty passages were filled in, and after Pond’s death on 9 September 1758, when part of his collection of drawings and his stock of copperplates were bought by John Boydell (1720-1804), that the year of his death was added in the plate. GL

Stamped on verso, lower right, with the mark of Chevalier de Damery (L.2862)