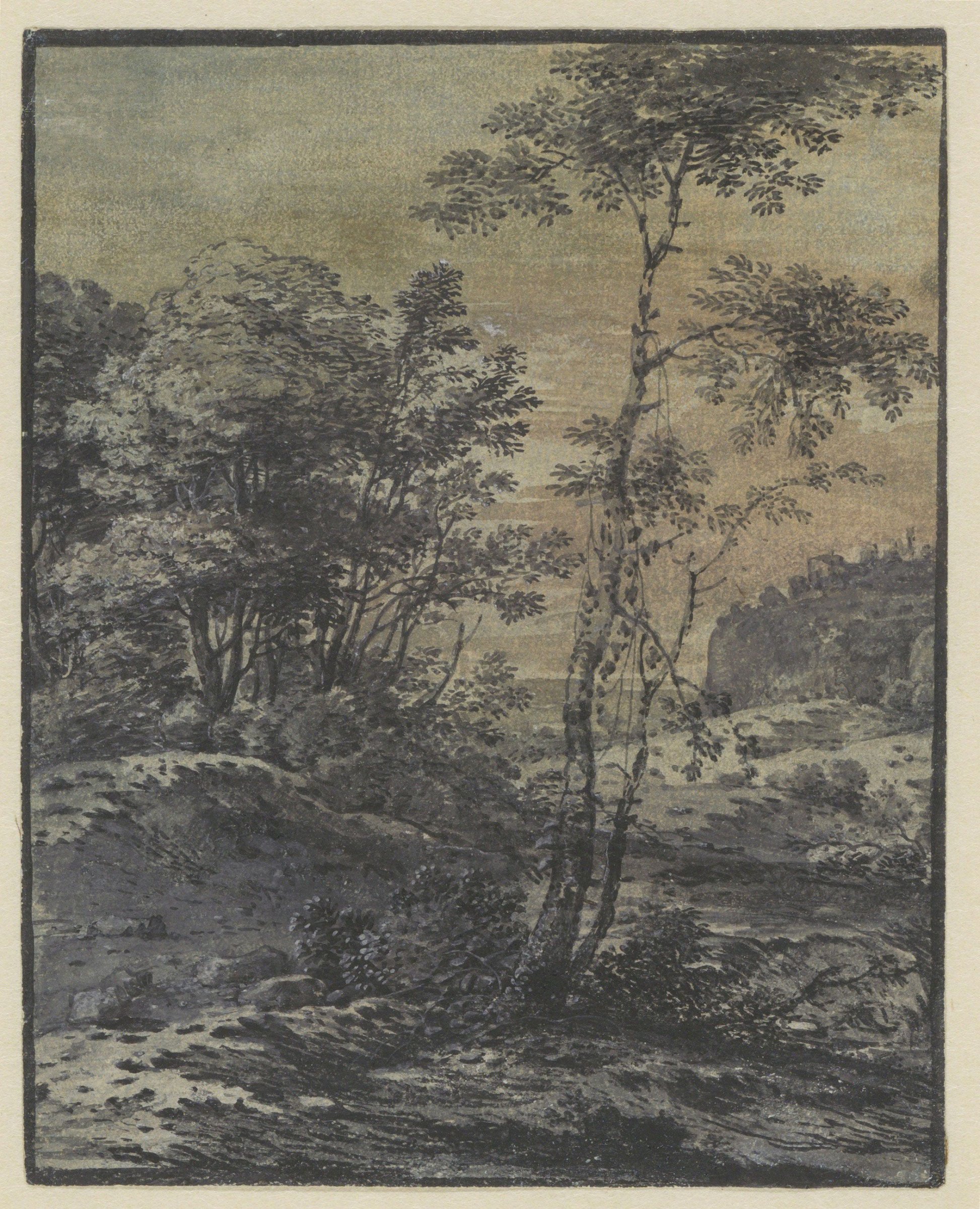 Frits Lugt had the ability to get his hands on unique, atypical works in the oeuvre of an artist. In the spirit of its founder the Fondation Custodia acquired View at the Edge of a Wood, a very unusual landscape drawing formerly attributed to the Dutch artist Dirck Dalens the Younger (1657/58-1685). According to the entry in the 1996 sale catalogue, the present sheet falls halfway between two familiar groups of drawings by Dalens, i.e. his highly finished landscape drawings in monochrome washes, such as Wooded Hilly Landscape with Horseman and Servant in Amsterdam1 and his gouaches, which are now considered to be by the artist’s son Dirck Dalens (1688-1753).2

Although there are similarities in the rendering of the foliage in these monochrome drawings and the present sheet, there is not enough evidence to maintain the attribution to Dirck Dalens the Younger. The present sheet is closer in execution and style to two nocturnal landscape drawings in the Rijksmuseum, catalogued as German School.3 All three drawings display a comparable handling of the brush, particularly in the way the artist depicted the rocky foreground, the slender trees and the foliage. The present sheet is definitely the most naturalistic and atmospheric of the three and seems to precede the Romantic landscape drawings of the nineteenth century.

Interestingly, one of the Amsterdam drawings is inscribed with the monogram “PAI” in ligature followed by the year 1656.4 As suggested by Ger Luijten, this is the monogram of the Flemish landscape painter Philips Augustijn Immenraet (1627-1679).5 The same letters, written rather crudely, appear in the margin of some of his early etchings made after designs by Lucas van Uden (1595-1672/73).6 They were probably made in the early 1640s, during the young artist’s apprenticeship to Van Uden. Although View at the Edge of a Wood and the Amsterdam drawings can be dated more than a decade later, they still recall Van Uden’s atmospheric landscape drawings, which were often enhanced with washes of various colours and executed on blue prepared paper.

Hardly anything is known about Immenraet as a draughtsman.7 Presumably, his drawings are mistakenly catalogued under various names and schools in print rooms all over the world. His painted oeuvre is much larger and reflects the more naturalistic Flemish landscape tradition of Gillis van Coninxloo the Younger (1543-1606/7) and Peter Paul Rubens (1577-1640) that emerged during the first half of the seventeenth century.8 Striking in his paintings are the meticulously painted leaves with juxtaposed dashes, the greenish-brown colour palette and the warm, Mediterranean light.9 The same features can be observed in the present sheet. MR

Point of brush and black ink, with watercolour and gouache, over a sketch in black chalk, on greenish-blue prepared paper; framing line in black ink; laid down. – 140 × 111 mm.Watermark: not visible

4This monogram was mistakenly interpreted as IAR or IAP on the museum’s website.

9A sojourn to Italy is presumed, though no evidence for this has come down to us; see Arnold Houbraken, De groote schouburgh der Nederlantsche kunstschilders en schilderessen, 3 vols., Amsterdam 1718-21, vol. 1, p. 356; and De Séjournet-Van Rijckevorsel 1995, op. cit. (note 9), p. 55.

10The old mount was probably removed after the sale of 1996. Loss of paper fibres and glue residue are visible on the verso of the drawing.