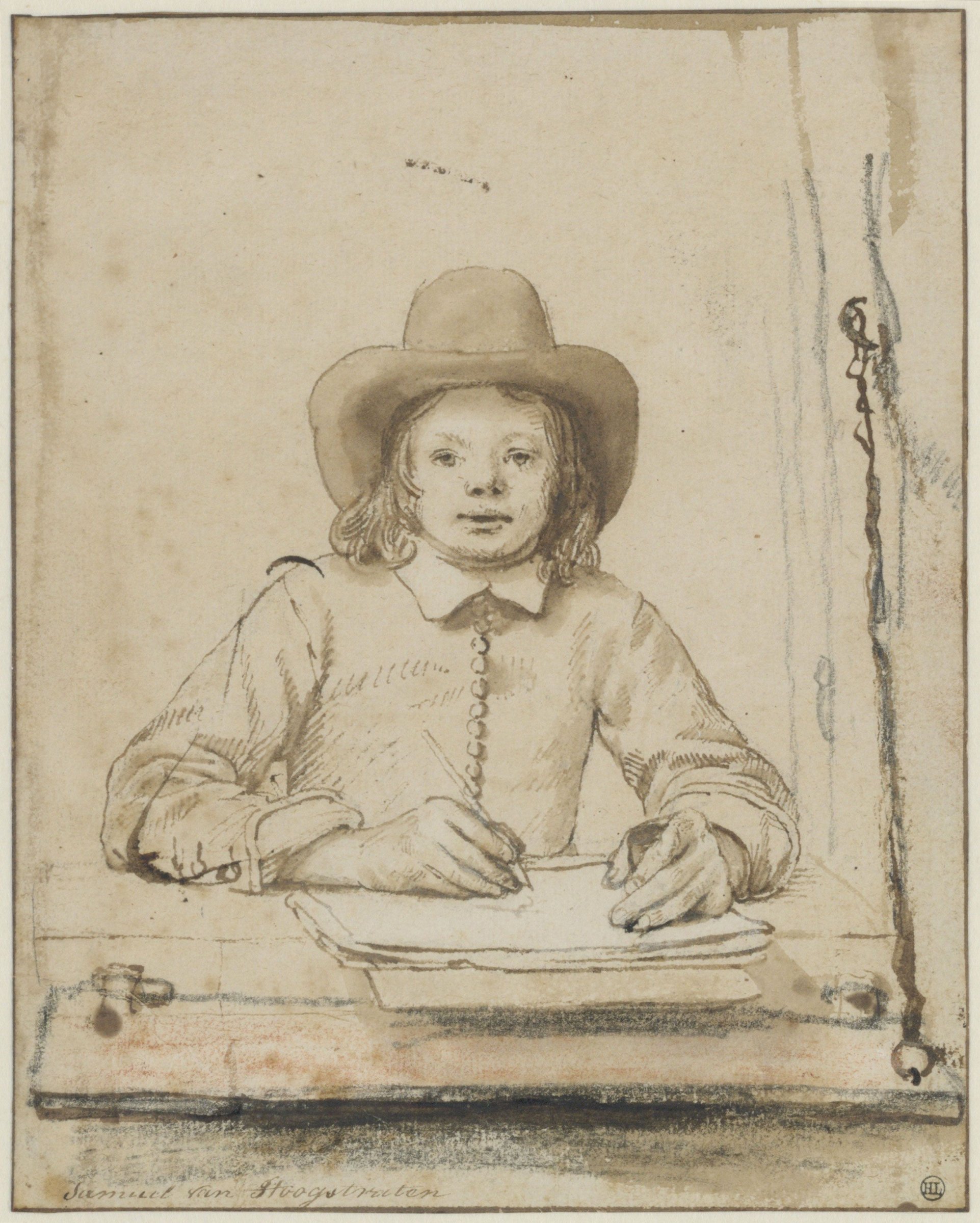 This long-haired boy, wearing a large bowler hat and buttoned up jacket, is the Dutch painter, draughtsman and writer Samuel van Hoogstraten.1 He sits at an open window, looking intensely at the spectator, his goose quill on a sheet of paper in front of him. He is not looking at us but at himself in the mirror. Not long after being apprenticed to Rembrandt in 1641, the young artist made this self-portrait, probably as a drawing exercise in his master’s workshop.2 The delicately, but hesitantly applied contour lines and the big, rather clumsily drawn hands betray his inexperience as a draughtsman. Presumably, it was Rembrandt himself who corrected the outline of the sitter’s right arm and shoulder with three forceful strokes of his pen. If this is the case, the drawing is a very rare and early example of the way Rembrandt taught his students how to draw. We only know of a handful of drawings by pupils with corrective lines, most of which can be dated to the early 1650s.3

After his apprenticeship to Rembrandt, Van Hoogstraten returned to Dordrecht, where he pursued a career as a painter of history scenes, genre pieces and portraits. He must have taken the drawing with him, because it served as a basis for a painting, which was probably made in Dordrecht around 1650.4 It shows the artist, looking slightly older and wearing a beret, seated in a stone-framed window with an attached shutter. Ben Broos suggested that Van Hoogstraten reworked the drawing in preparation of the painting and added the open shutter with a chain to the composition.5 Eventually, he simplified this feature in the painting, which is shown hanging vertically. The position of the hands, especially the left hand with the ink-well, is directly copied from the drawing. Moreover, Van Hoogstraten seems to have implemented Rembrandt’s corrections. In the painted version the right arm is less extended and closer to the body.

Broos, in his publications on the present drawing, did not describe the print by Ignace-Joseph de Claussin (1766-1844), in which Self-Portrait at a Window appears facing in the same direction as in the drawing.6 Claussin, a French printmaker and collector of Dutch and Flemish drawings, made more than 200 etchings after works of Rembrandt and other artists. Some of these works, including Van Hoogstraten’s self-portrait which he acquired at the sale of Dirk Versteegh (1751-1822) in 1823, came from his own collection. A second print in mirror image, probably a nineteenth-century copy, recently surfaced on the art market.7 It appears to be closer to the original drawing than to the Claussin print. For instance, the printmaker literally copied the black chalk hatching at the right, which seems to represent the shadow of the chain cast on the wall behind. Claussin, freely interpreting this part of the drawing, etched a rope tied to a nail in the wall, rather than a chain.

This anonymous nineteenth-century printmaker could well be someone in the entourage of Louis-Pierre Henriquel-Dupont (1797-1892), a printmaker himself and one of the last owners of the drawn self-portrait. Ignoring the eighteenth-century attribution to Van Hoogstraten on the drawing, he or she boastingly forged the signature of Rembrandt in the upper right corner. MR

Pen and brown ink, with brown wash, over traces of black chalk; corrections in pen and brown ink probably by Rembrandt; later additions by the artist in black and red chalk and pen and brown ink. – 170 × 135 mmWatermark: fragment of a foolscap with the letters “IC” (cf. Schatborn 2010, vol. II, p. 202, no. 98, repr.)

7Sale, Paris (Binoche and Giquello), 28 June 2017, no. 17, together with one other print. I am grateful to Jaco Rutgers and Bob Haboldt for bringing this print to my attention.