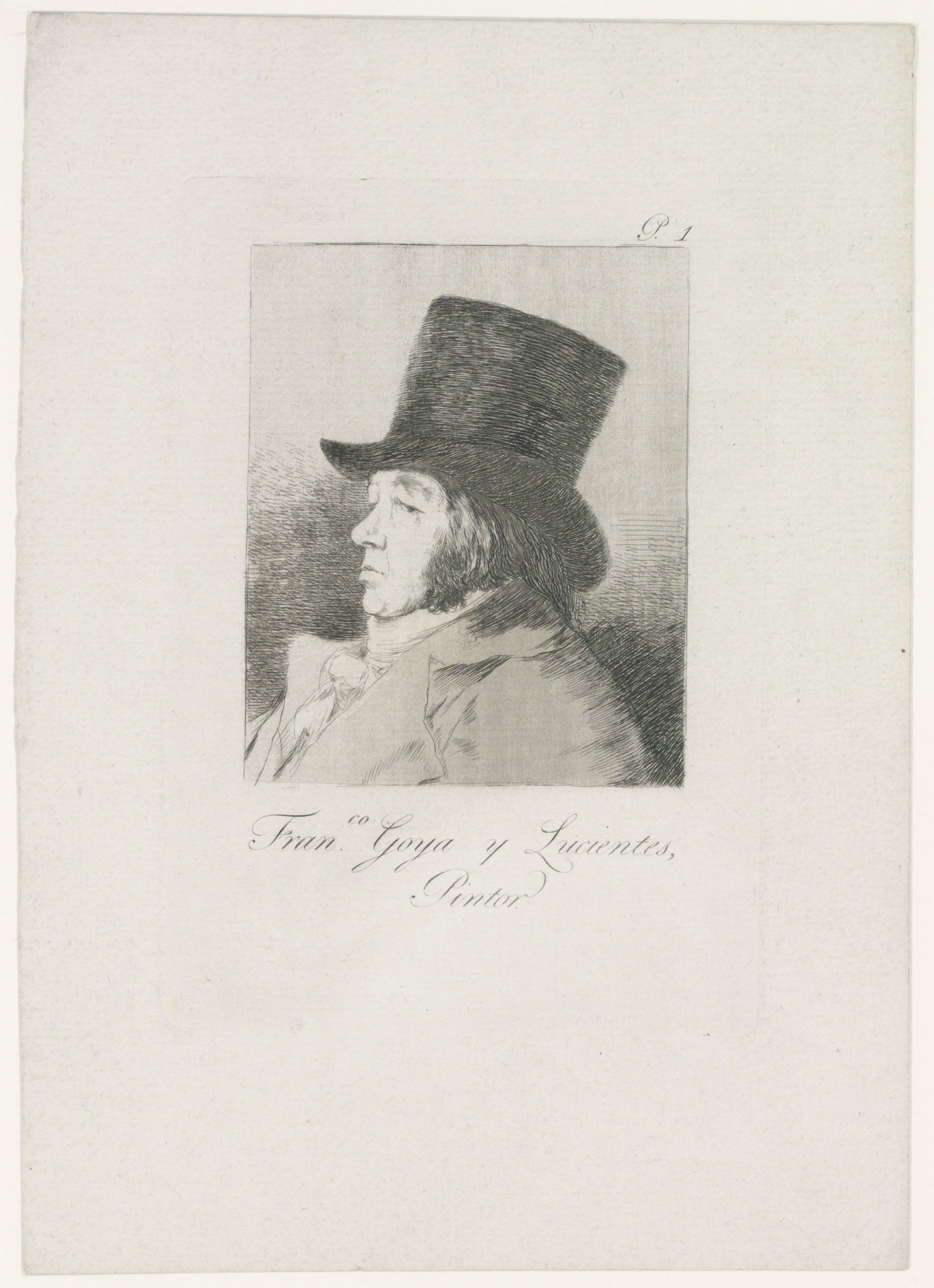 There are several self-portraits of Goya, both painted and drawn, in which he presents a different side of himself each time.1 In a relatively early canvas of around 1773 he is sunk in thought, his face framed by the dark background to create an image of himself in pure contemplation.2 There is also a large painting of 1783 in which he is humbly presenting a painting to his first patron, Don de Floridablanca.3 A work of a very different order is the sublime small Self-Portrait in his Studio in the Real Academia de Bellas Artes in Madrid, in which he is standing in front of a window through which beautifully filtered light falls into the room where he is working on a picture and displaying his colourful palette to us.4 And then there are drawings in which he depicts himself straightforwardly in various techniques and always with an unmistakable intensity,5 or in which he plays a part as a protagonist, as in the design for the series Sueños’ (“Dreams”), his initial design for the title page of the Caprichos, an idea that he pursued in a drawing with an inscription explaining the purpose of the publication: “The author dreaming. His only purpose is to banish harmful ideas commonly believed, and to perpetuate with his work of Caprichos the solid testimony of truth”.6

In the end Goya included the print after the drawing as plate 43 in the main body of the Caprichos, with the title The sleep of Reason produces monsters,7 and decided to make this Self-Portrait the title page. He probably set up two mirrors in order to achieve this side view. His expression is less emotive in the drawing, where the mouth is not turned down as much.8 The Goya specialist Eleanor Sayre made a penetrating analysis of the expression, citing Charles Le Brun’s Le mépris (“Contempt”) from his treatise on facial expressions.9 She also quotes early viewers of the print, who used the terms ‘satirical’ and ‘ill-humoured’ in their descriptions of the expression.10 Goya himself described his appearance in a letter of 1787, in which he speaks of his deep-set eyes (“ojos undidos”) and snub nose (“romo”),11 and was well aware of the potential of those features to define character. Giving himself a pitying look at the opening of the Caprichos, a series that demonstrates man’s stupidity and summons up fateful and inescapable demons – a crowning achievement in the history of western printmaking – epitomises Goya’s artistic sensitivity and ingenuity. He employed them to give shape to his critical spirit and the analytical mind that spawned all those astonishing images.

Tomas Harris, in his oeuvre catalogue of Goya’s prints, calculated how many impressions were taken from the copperplate of this Self-Portrait. It was used unremittingly throughout the nineteenth century for dozens of editions,12 as is immediately apparent from the traces of plate wear in the very disagreeable late impressions. We were therefore delighted to be able to lay our hands on this early proof impression of the iconic Self-Portrait that does full justice to Goya’s intentions in the print. The paper is thick and sturdy, as it is in other proof impressions and working proofs, and the dimensions of the uncut sheet match theirs precisely.13 The background tone is in superb balance, the hatchings have the correct depth to give the figure volume, and the aquatint in the coat does what it is meant to do: suggest the application of diluted grey ink. The splendid side-whiskers are carefully differentiated and look like beard hair. The eyebrows are more flax-like. The hat gleams, but differently from the locks of black hair emerging from beneath it. GL