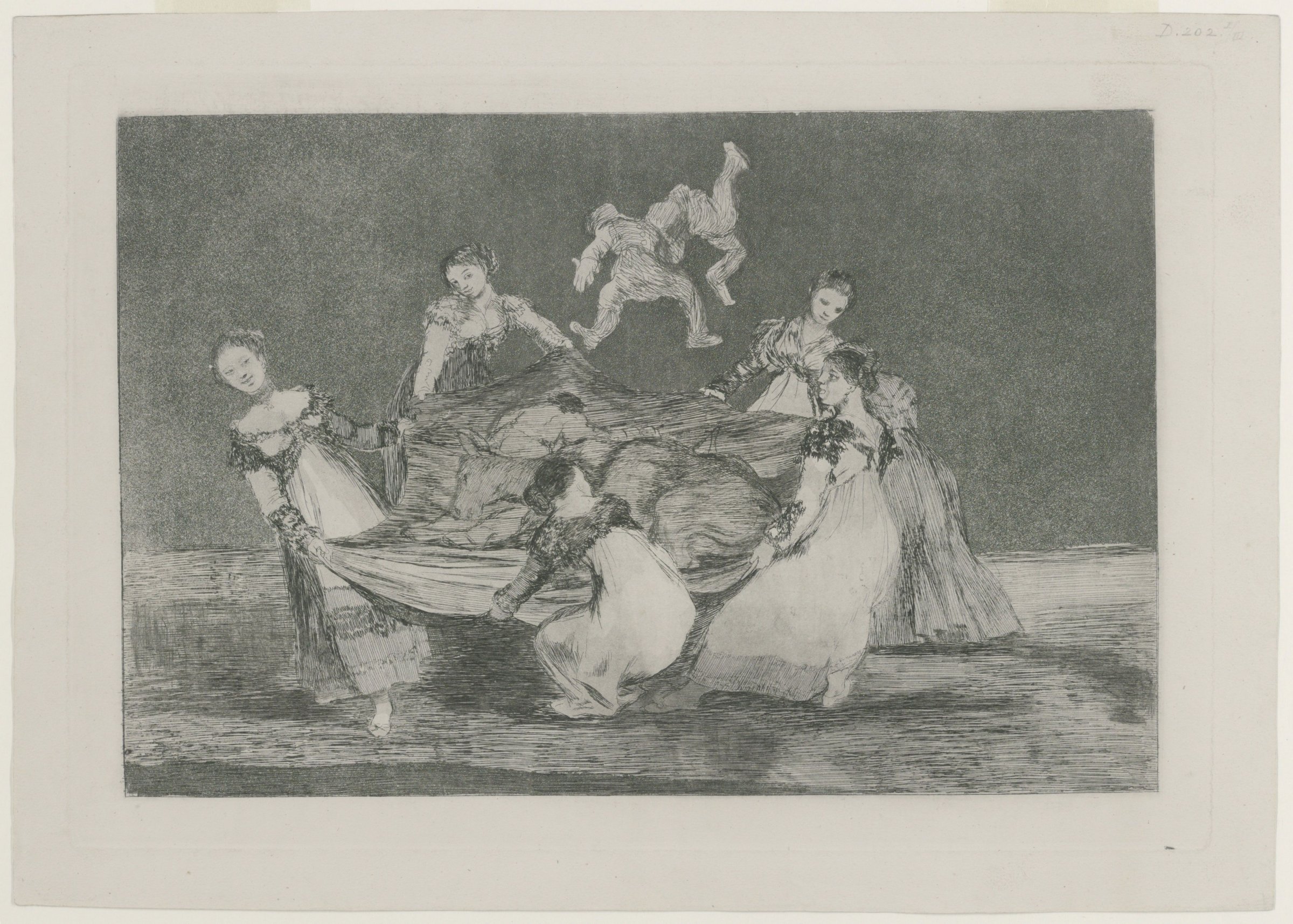 The Spanish painter, draughtsman and printmaker Francesco José de Goya y Lucientes excelled in creating art works with intense, haunting themes. One only has to think of the horrifying image of Saturn Devouring His Son.1 This work is part of the so-called Black Paintings, a group of fourteen paintings executed by Goya between 1820 and 1823 on the walls of his country house in Madrid, the Quinta del Sordo (Deaf man’s country house). The dark and ominous atmosphere in these paintings can also be found in the Disparates, one of his most ambiguous and enigmatic prints series, dated 1819-1823.2 The prints depict bizarre, nightmarish visions, marked by violence and superstition. Probably for this reason, they were never published during Goya’s lifetime. Eighteen of the twenty-two plates were printed privately in Madrid, possibly after the death of Goya’s son Javier in 1854. In 1862 they were acquired by the Academia de San Fernando, which posthumously produced an edition under the title Los Proverbios in 1864.

The Fondation Custodia recently acquired one of only four known trail proofs of Disparate femenino, the first sheet of the series Los Proverbios, printed in a rich toned black ink.3 It depicts a group of six young women, playing blanket toss with peleles (straw-filled puppets). Two puppets are in mid-air, their limp, contorted arms and legs waving wildly around them. Woven into the blanket are the figures of a dead ass and another puppet or human being. Because of the Academia’s collective title, scholars long sought to relate the prints to common sayings. Disparate femenino has been associated with the proverbs “heavier than a dead donkey” (pesa mas que un burro muerto) and “those who play with puppets are donkeys” (con los burros se juega a los peleles).4 However, there is no evidence that Goya intended his prints as illustrations of proverbs. A working proof bears the inscription “disparate femenino”, written in the artist’s hand.5 Therefore, it is more likely that Goya wanted to illustrate the stupidity of men who easily fall victim to a woman’s tricks.

The same scene appears in a cartoon painting for a tapestry, designed by Goya for the residence of King Carlos IV of Spain (reg. 1788-1808) around 1791/92.6 Compared to the dark and lugubrious image of the print, the painting, executed in bright, pastel colours, is a rather joyful interpretation of the same message. A preparatory drawing for the print, freely brushed in sanguine wash, is in the Museo del Prado in Madrid.7 MR

5Ibid., p. 372, under no. 248. Although Harris did not believe the inscription to be authentic, it is now generally accepted to be the hand of Goya. See Mark P. McDonald, Renaissance to Goya. Prints and drawings from Spain, exh. cat., London (British Museum) 2012, p. 262.