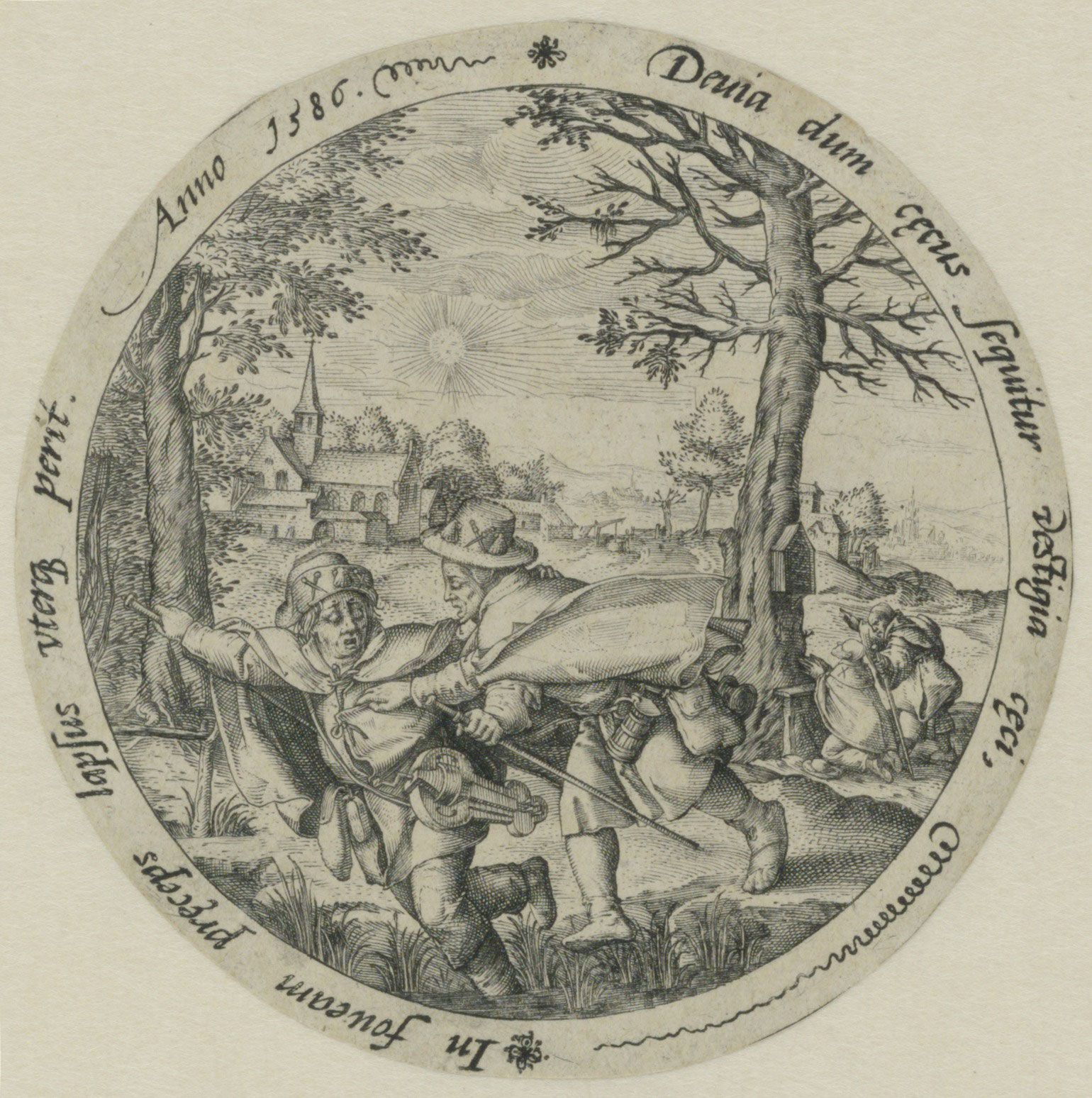 The parable of the blind leading the blind, told in St Matthew’s gospel, was frequently depicted in the visual arts of the sixteenth century as a metaphor for believers who had strayed from the true path. The world-famous painting of 1568 by Pieter Bruegel the Elder (1526/30-1569) is one of the best-known representations of the subject.1 It depicts a group of blind beggars walking through the Flemish countryside with a church in the background. In order to stay on the path they have a hand on the shoulder of the beggar in front of them or are holding onto a stick. However, the equally blind leader of the group has already tumbled into a ditch, and the others are bound to follow. Like this print by Hendrick Goltzius, the scene is an almost literal translation of Matthew 15:14: “Let them alone: they be blind leaders of the blind. And if the blind lead the blind, both shall fall into the ditch.”

Bruegel’s interpretation of the parable was famous and gave birth to many imitations.2 A series of twelve circular engravings with Bruegelian subjects, some of which bear the monogram of the Antwerp engraver Johannes Wierix (1549-1615/20), was made around the same time.3 One of them depicts the parable of the blind leading the blind, and has an inscription around the edge in which the readers are advised to follow their path through life cautiously and to trust no one but God. The circular format, the inscription and the rendering of the subject match this print by Goltzius. He probably knew the prints and wanted to make a similar series himself.4 However, The Blind Leading the Blind cannot be associated with any other print in Goltzius’s oeuvre.5

Another example on which Goltzius’s scene goes back is a print by Pieter van der Heyden (1520/40-1572/92) in which two blind and rather nasty-looking pilgrims are falling into a ditch.6 Unlike the circular engraving from the series and Bruegel’s painting in Naples, this example, like Goltzius’s print, shows not blind beggars but blind pilgrims, who are recognisable as such by the scallop shells and crossed pilgrim’s staves on their hats. In fact, they are not true pilgrims at all but frauds who are pretending to be devout pilgrims. There were many of them around, according to sixteenth-century sources, and they were sometimes difficult to tell apart from genuine ones. The fake pilgrims used the pilgrimage not to get closer to God but as an excuse for leading a dissipated tramp’s life and swindling naive believers out of money.7 That kind of existence was roundly condemned, and could only end badly, which is the print’s message. The behaviour expected of a true pilgrim is depicted in the background of Goltzius’s print, where two cloaked worshippers have stopped to pray at a wayside altar.8

The Blind Leading the Blind occupies a unique position in Goltzius’s engraved oeuvre. Stylistically it differs drastically from other works of his from the same year, such as the series of Roman heroes dedicated to Emperor Rudolf II (reg. 1576-1612).9 This series was clearly influenced by Bartholomeus Spranger (1546-1611), whose elegant, Mannerist style Goltzius got to know in the early 1580s.10 MR

4It is also possible that the little The Blind Leading the Blind served as a design for a medallion or miniature.

5Rudolf Weigel suggested a connection with another print by Goltzius. However, this contention was not accepted by Otto Hirschmann; see Walter L. Strauss (ed.), Hendrick Goltzius (The Illustrated Bartsch, vol. 3), New York 1982, p. 86.