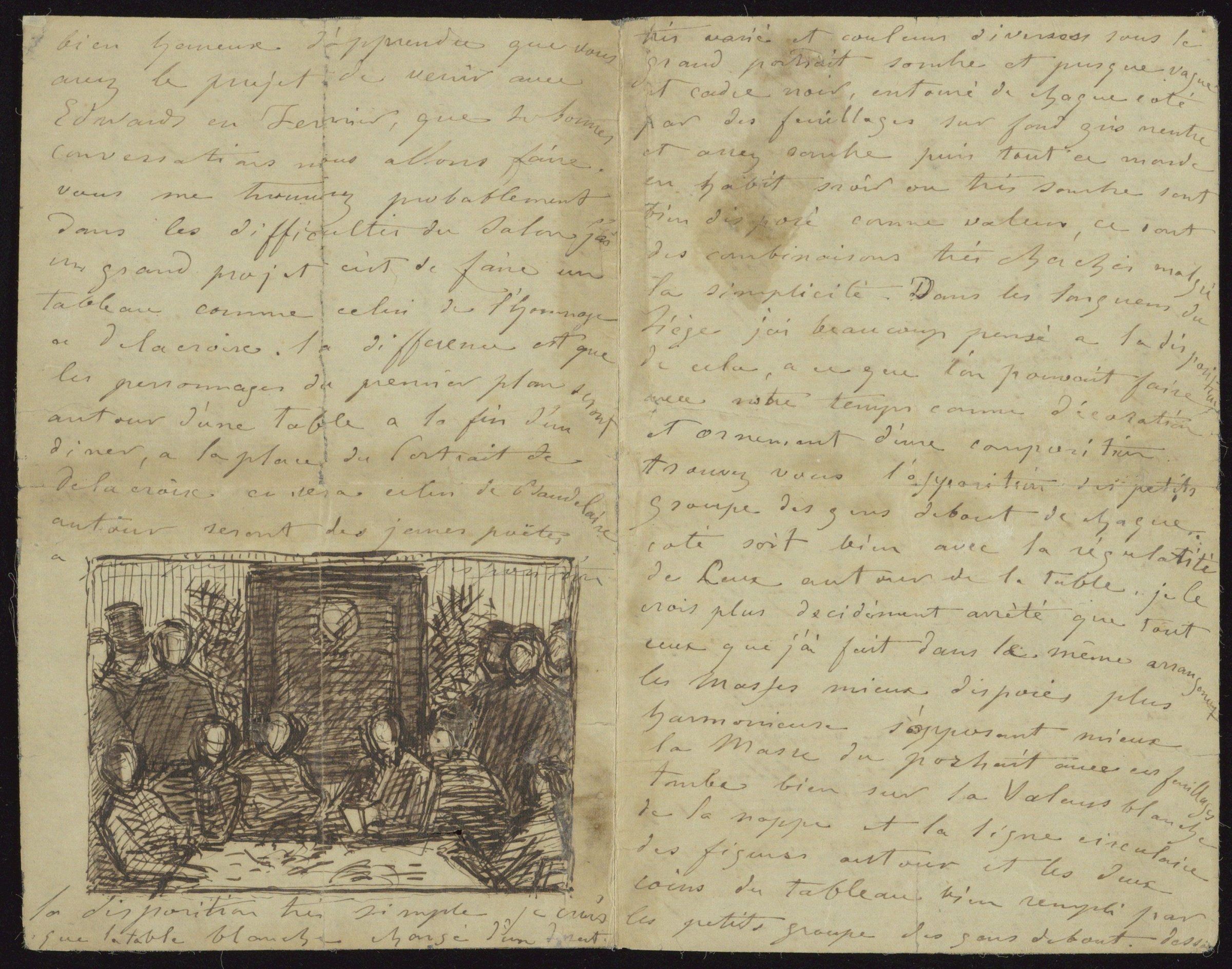 In 1864, Henri Fantin-Latour presented his Hommage à Delacroix at the Salon.1 The artist’s first group portrait, this painting is the prototype of a pictorial genre he constantly explored throughout his career, as it gave him the opportunity to stage one of his favourite themes: the complex articulation between individual and group. Towards 1870-1871, Fantin sought to tackle the genre once again by exhibiting a memorial-picture in the Salon as a tribute to Baudelaire, who died in 1867.

The development of this project can be followed through Fantin’s correspondence and the compositional studies that have come down to us. Since 2011, the Fondation Custodia has had the privilege of preserving one of them, drawn in pen on a letter that Fantin addressed to his great friend, the painter Otto Scholderer (1834-1902), at the end of the year 1871. The artist explained in detail the iconographic programme he wished to carry out for his painting. Combining image and text, in an extremely quick intellectual play, he pinpointed here the compositional problems facing him at this stage of the process. He also presented his choice of colours, contrasting the dark values – the grey ground, the black attires – and the white of the tablecloth, according to “very elaborate combinations despite the simplicity”. While the aesthetics and the balance of his composition loomed large in his thoughts, Fantin did not disguise his excitement at the idea of painting a series of portraits: “there is nothing so interesting as this series of portraits, it delights me. I would willingly do a mile of them …”.

In view of Scholderer’s reply in his letter of 24 January 1872, reassuring Fantin about the arranging of his figures, we can imagine the course the artist followed to achieve the final work shown at the Salon of 1872, Coin de table,2 which is only remotely connected with his original project of a tribute to Baudelaire.3 In the two other compositional studies in black chalk,4 we should probably see the intermediate stages preceding the composition of Coin de table, or else alternatives contemplated at an even earlier stage of the creative process, as some indications of dates on the Louvre drawing suggest. In any case, it is difficult to reconstitute the chronological sequence of these sketches.

The Fondation Custodia collection of autographs is particularly rich in correspondence concerning Fantin-Latour, with some 300 inventory numbers of letters of which he is either the author or the addressee. Within this ensemble, Otto Scholderer is definitely the most privileged correspondent, the Fondation having acquired, in 2011, a hundred or so letters from Fantin-Latour addressed to him. MNG

Four pages on a double in-8° sheet