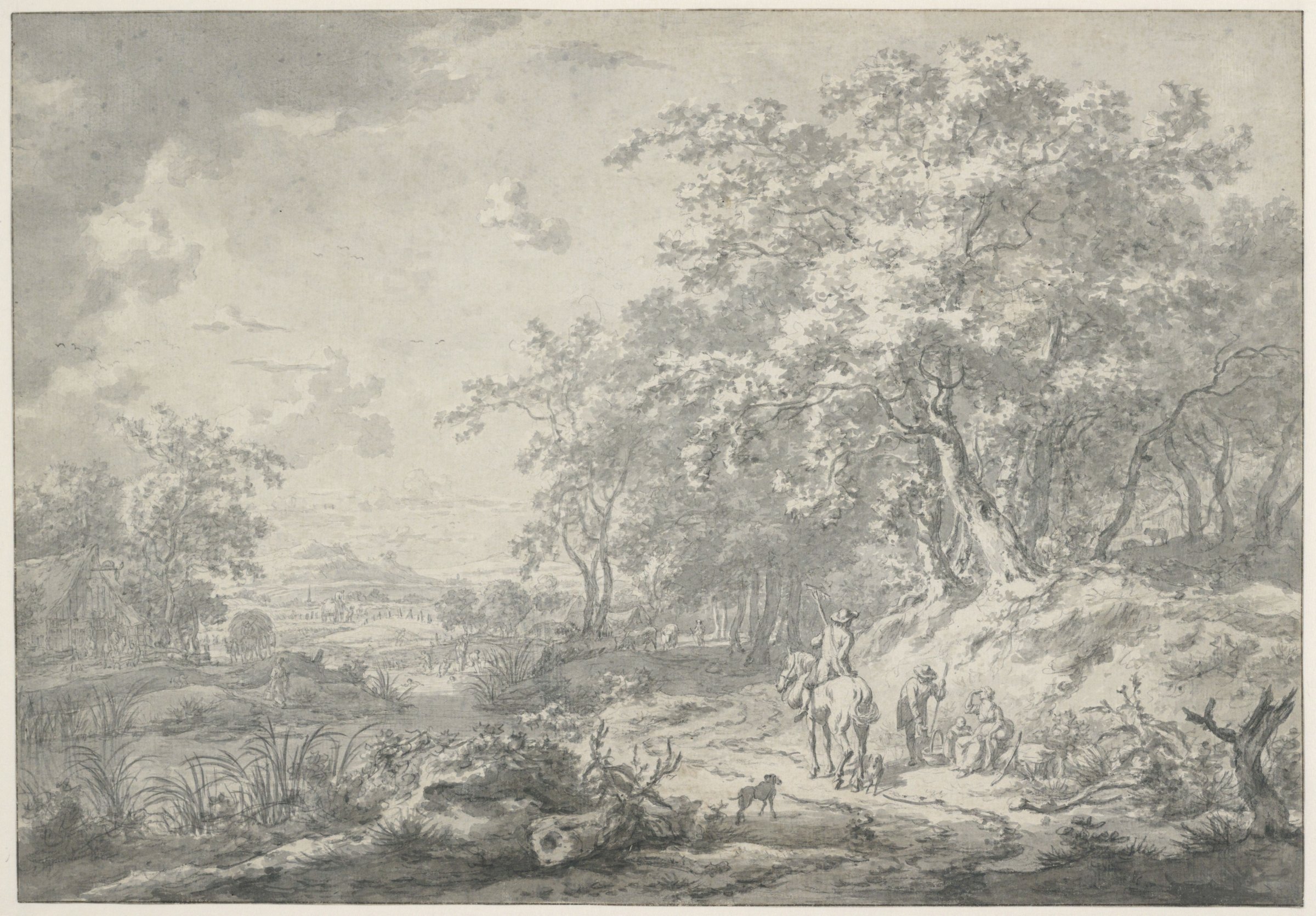 After his apprenticeship as a decorator in an atelier for lacquered objects in Groningen, Egbert van Drielst set out for Haarlem to work in the studio for painted wall hangings of Jan Augustini (1727-1773). In 1765 he moved to Amsterdam, where he studied with Hendrik Meijer (1744-1793) and Jan Smeijers (1741-1813). His earliest documented painted wall hangings date c. 1770.1 At that time both Dutch and Italianate landscapes were favoured for decorating rooms in the well-to-do burghers’ homes. Landscape with Riders and Travellers is close in execution and subject to two landscape drawings by Van Drielst, inspired by the work of the Italianate artist Jan Both (1618/22-1652).2 However, several elements, such as the low farmhouses seen through the dense trees and the inn on the left, appear to have been directly taken from the wooded landscape of Drenthe, in the northeast of the Netherlands.

All his life Van Drielst travelled back and forth between Amsterdam and the province of Drenthe, a region still known today for its heaths, peatlands and dense forest.3 According to the art collector Jacob de Vos Willemsz. (1774-1844), Van Drielst went there because he wanted to see nature with his own eyes as it had been painted by Jacob van Ruisdael (1628/29-1682) and Meindert Hobbema (1638-1709).4 The then relatively untouched landscape of Drenthe became his major source of inspiration, earning him the nickname “The Hobbema of Drenthe”.

While his production of painted wall hangings was reduced due to the changing fashions in interior decoration at the end of the eighteenth century, Van Drielst devoted himself to making landscape drawings and paintings for collectors. He often used drawings in black chalk and grey wash, called “schetzen” (sketches), as the basis for more finished drawings or watercolours. As the artist himself inscribed on the back of the drawing, this sheet served as such a “schets” for a more finished drawing in the collection of Jan van Dijk (d. 1790) in Amsterdam. A second drawing by Van Drielst, representing A Winter Landscape with Wood-Cutters near a Farmhouse, bears a similar inscription.5 Both sheets are the preparatory studies for two finished drawings, originating from a series with the four seasons by Van Drielst in the collection of Van Dijk.6 In his sale this set is described as four large landscape drawings, representing “the invigorating spring”, “the pleasant summer”, “the stormy autumn” and “the cold winter”.7 The description of “the pleasant summer” corresponds with the drawing discussed here, as well as a finished sheet in brown and grey wash of the same composition by Van Drielst in Weimar.8

Inspired by philosophical reflections on nature in the late eighteenth century many artists took up a familiar theme in the visual arts: the changing of the seasons. In the Netherlands the poem The Seasons (1730) by the Scottish poet and playwright James Thomson (1700-1748) was extremely popular. He was praised for his ability to visualize spectacular wide-ranging landscapes, but also to capture the tiny characteristic details of nature. Van Drielst must have known the Dutch translation of the poem that was published in 1769.9 In every detail of Landscape with Riders and Travellers summer is present. One is almost tempted to put on a swimming suit and join the bathers in the little pond. MR

Point of brush and grey ink, with grey wash, over a sketch in black chalk. – 398 × 575 mmWatermark: dovecot

3Also in 1778, the year in which he drew Landscape with Riders and Travellers, the artist travelled to Drenthe ; see ibid., p. 144.

6The author is preparing an article on this series and the artist’s relationship with Van Dijk.